By Westlake Golf and Country Club


At Westlake, one kindness turns into another and then another and another! Ultimately, love and support for others permeates all of our activities.  One such recent example is the donation of $13,200 raised by the Westlake Women’s Golf Association (WWGA), during their charity golf tournament on August 20, 2015 in support of United States Army First Lieutenant Dennis W. Zilinski, II Memorial Fund.  This Fund, co-founded by his mother, Mrs. Marion Zilinski, honors the life and memory of 1st LT Zilinski by providing support to wounded warriors and their families.  Additionally, the Fund provides scholarships to high school students at Christian Brothers Academy (CBA) who embody the leadership qualities and community spirit of Lieutenant Zilinski.  Raised in Middletown, NJ, Dennis attended CBA and graduated from the United States Military Academy at West Point in 2004. Deployed with the 101st Airborne Division in September 2005, Dennis was killed by a roadside bomb, at the tender age of 23, in Iraq on November 19, 2005.

On October 16, 2015, the WWGA proudly presented a check in the amount of $13,200 to Mrs. Zilinski and Annie OStattel. In turn, Mrs. Zilinski will donate the funds to “K9s for Warriors” to purchase a specially trained service dog to help a local wounded warrior and his/her family to move forward after suffering a post-traumatic stress disability.

As another kindness, Mrs. Zilinski, and the WWGA members in attendance during the check ceremony, decided that Westlake would conduct a “Name the Service Dog,” contest. Each entry will cost $5.00 and all funds raised will go towards a local family in need, over the upcoming holidays.

The Lt. Dennis W. Zilinski, II Memorial Fund and the K9s for Warriors are 501 ©(3) non-profit organizations. All contributions are tax-deductible to the fullest extent of the law. 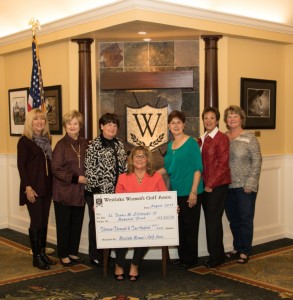 Schedule an appointment, find a home, or learn more about what Westlake has to offer.
Click here to Contact Us

Featuring sensational lunch and dinner menus that we switch up to please all taste buds, you and your family and friends are in for a lovely dining experience.